Choose a image with the url

sorry, my english is very bad, but i hope you understand what i mean.

I have a question for populating an image on a content. So far you can only use the button “Select” to select the image in the directory tree, which is very disadvantageous for a large gallery with no cookie, if the path is not noticed. Or drop it in the field, but where you just can not work with folders. Is there a way to create an input field in addition to the button, where you can simply copy the URL of the image?

We give our images always the same name and they only differ by a number at the end. With a URL field insertion would go much faster than if we had to click us for each image through the directory tree to the correct folder.

Hi Mario! Thanks for your patience, busy few weeks

That’s not currently possible - only the select or upload options are available. I have logged the feature request in our internal tracker (#351) and will let you know here when we add something like that.

It would be technically possible to use a simple text field as field to insert an image from URL simply by setting its template to an img tag, but then you wont have the preview in the canvas.

Thank you for the quick reply . I’m waiting until something new gives . Thank you.

i saw that my proposal “adding a picture through their URL possible” got accepted and I am very grateful about that. Since the acceptation was already a few weeks ago I would be happy to know how long it might take to add the function. This would be a great help because the implementing of many pictures takes quite some time with the actual system because you have to choose every picture separately- and with many objects in the system that takes some time.

The problem is that this frustrates a lot of back-end users. I know that the problem is caused by Modx which doesn’t have the ability to save / recreate the path of the picture you used before. It is also a fact that this problem affects ContentBlocks. I guess it would improve the work-flow greatly, especially when a clear naming is used. We know that the list of proposals and improvements is pretty long, but we really hope it won’t take long.

Thanks in advance and best Regards,
Mario

No Answer? It is really important for us to solve the problem, but we need your help here.

Therefore look forward to a response from you .

Thanks in advance an best Regards,
Mario

As Mark said, we’ve added it to our feature request tracker, but don’t currently have a timeline for when it might get implemented. If and when we do, we’ll make sure to let you know! Thanks for the great idea.

thanks for the info, i hope it will work as well as I had imagined

since the feature we recommended wasn’t included in the latest update, we thought we might have been unprecise in our explanation. Therefore we made an graphic explanation how we imaged it.

At first we we wished for a possibility to add a picture which is already on the server with his URL. This might be realized through a box below the upload-button. The pictures would otherwise be handled normal.

In the backend should, independent how it was uploaded, the URL of the picture should be shown below it and a possibility to edit it directly be given. This would make double entries easy.

I hope you understand that this would ease the implementation of pictures and avoid pointless work since the Media Browser doesn’t save the last used path. 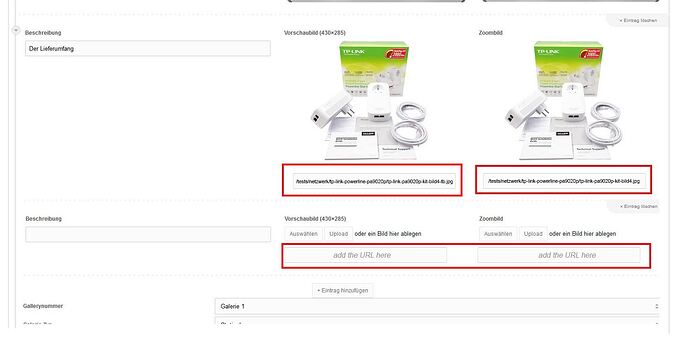 Your feature request for inserting an image from url is still on our wishlist, though the way I have it in mind is different from your example in that I’m not sure about making the url editable once an image is in place. Instead I was thinking of a third button next to Choose and Upload where you can enter the url in a popup.

The reason it’s not in the last release is that we haven’t gotten to building it yet. Things have been a bit slow here the past couple of months due to illness and the rest of the team having to work on higher priority projects for their other clients (they’re all independent developers with their own businesses, not fulltime modmore employees).

When we make progress on your feature request and have confirmation of what version it will be available in, we’ll let you know here. I’m hopeful we can look at it for the next feature release as we also have some other ideas to enhance the image input type, but I can’t promise when it will be available. We shift features back and forth all the time and unexpected things do happen.

I appreciate your patience.

we understand delays of either kind completly, but we wait already eight months for the implementation which is quite some time. While we port reviews we have to do about 12 clicks for one picture and some have 50 and more. At the review i work now i got a total of 624 clicks, since we have to do:

x2 since we got the tumbnail and the regular picture - only because ModX can’t remember the last used path and the missing possibility to C&P the URL of the picture. Of course we
understand that not many websites use as many pictures as tech sites, but expecially those need an feature like that.

Drag and Drop wouldn’t be a solution since there would be chaos in the one used folder.

We would be very happy if you would try to implement the feature soon or at least try to give it an higher priority. I am sure also several other customers would be happy since you
would be only ones who provide such an feature.

I understand you might be frustrated it’s taking so long. It’s definitely on the list of things we’ll add, but that’s all I have for you right now, because I don’t want to promise you something until I’m 100% sure I can live up to any promise I make.

This is not an ideal situation or how I want to run modmore, but given the recent months that’s how it is until we get everything back on track, which will take time. I really want to guarantee you it will be in 1.6 or ready by a certain date, but right now I simply can’t make promises like that.

What I can do, and promise I will, is to keep you up to date when we make progress on your request.

If you need a temporary workaround until then, you can use a simple text input where you paste in your links, but you’d miss the image preview in the back-end.

thanks for the quick response. I wish you best luck to get everything running again, an internal reorganisation can be very tiring.

I look forward to hear something from you again.

Hi @mkramer, I’ve just had a play with this and it looks like we’ll have this included in ContentBlocks 1.6. 1.5 is currently in prerelease so 1.6 is at least a few weeks out, but at least you know it’s being worked on

Here’s what the feature looks like at the moment:

we are very happy about your feedback and are looking forward to the release of the next versions. Thank you for your troube.

Is it already possible when version 1.6 is ready? Only from pure interest.

I’ll make sure 1.6 is out before Christmas! Sorry it’s taking so long.

Perfectly, thanks for the great information

@mhamstra First of all: Thanks for the update 1.6. As always, everything works perfectly. I’ve tested the new feature and I have a question about the relative path information you can put in: Isn’t it actually redundant to copy a picture that already exists on your own server? Instead of copying the image why not just parsing the path?

The primary reason is to ensure that every image inserts in ContentBlocks receives the same treatment when it comes to allowed file names/extensions, making placeholders for sizes available, and other handling. There’s not a lot of magical stuff happening right now, but when we add things like image cropping it’s important images have been processed the same when added.

It’s a trade-off between potentially duplicating local files and having inconsistent behaviour between different images depending on how they were added. If needed maybe we can make it smarter where it checks the image location with the configured media source, and only copy it when those are different…